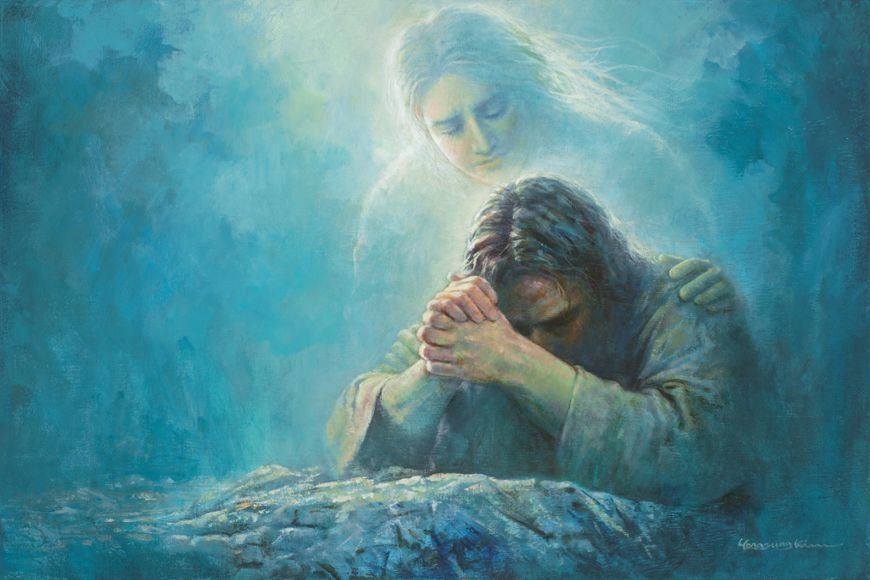 39 ¶ And he came out, and went, as he was wont, to the mount of Olives; and his disciples also followed him.
40 And when he was at the place, he said unto them, Pray that ye enter not into temptation.
41 And he was withdrawn from them about a stone’s cast, and kneeled down, and prayed,
42 Saying, Father, if thou be willing, remove this cup from me: nevertheless not my will, but thine, be done.
43 And there appeared an angel unto him from heaven, strengthening him.
44 And being in an agony he prayed more earnestly: and his sweat was as it were great drops of blood falling down to the ground.
45 And when he rose up from prayer, and was come to his disciples, he found them sleeping for sorrow,
46 And said unto them, Why sleep ye? rise and pray, lest ye enter into temptation.
47 ¶ And while he yet spake, behold a multitude, and he that was called Judas, one of the twelve, went before them, and drew near unto Jesus to kiss him.
48 But Jesus said unto him, Judas, betrayest thou the Son of man with a kiss?

54 ¶ Then took they him, and led him, and brought him into the high priest’s house. And Peter followed afar off.

27 Then the soldiers of the governor took Jesus into the common hall, and gathered unto him the whole band of soldiers.
28 And they stripped him, and put on him a scarlet robe.
29 ¶ And when they had plaited a crown of thorns, they put it upon his head, and a reed in his right hand: and they bowed the knee before him, and mocked him, saying, Hail, King of the Jews!
30 And they spit upon him, and took the reed, and smote him on the head.
31 And after that they had mocked him, they took the robe off from him, and put his own raiment on him, and led him away to crucify him.

22 And they bring him unto the place Golgotha, which is, being interpreted, The place of a skull.
23 And they gave him to drink wine mingled with myrrh: but he received it not.
24 And when they had crucified him, they parted his garments, casting lots upon them, what every man should take.
25 And it was the third hour, and they crucified him.

45 Now from the sixth hour there was darkness over all the land unto the ninth hour.
46 And about the ninth hour Jesus cried with a loud voice, saying, Eli, Eli, lama sabachthani? that is to say, My God, my God, why hast thou forsaken me?
47 Some of them that stood there, when they heard that, said, This man calleth for Elias.
48 And straightway one of them ran, and took a sponge, and filled it with vinegar, and put it on a reed, and gave him to drink.
49 The rest said, Let be, let us see whether Elias will come to save him.
50 ¶ Jesus, when he had cried again with a loud voice, yielded up the ghost.

38 ¶ And after this Joseph of Arimathæa, being a disciple of Jesus, but secretly for fear of the Jews, besought Pilate that he might take away the body of Jesus: and Pilate gave him leave. He came therefore, and took the body of Jesus.
39 And there came also Nicodemus, which at the first came to Jesus by night, and brought a mixture of myrrh and aloes, about an hundred pound weight.
40 Then took they the body of Jesus, and wound it in linen clothes with the spices, as the manner of the Jews is to bury.
41 Now in the place where he was crucified there was a garden; and in the garden a new sepulchre, wherein was never man yet laid.
42 There laid they Jesus therefore because of the Jews’ preparation day; for the sepulchre was nigh at hand.

60 … and he rolled a great stone to the door of the sepulchre, and departed.

Today I have posted just a few verses for a glimpse of the agony our Savior went through on that first Good Friday. His anguish began with the distress of the atonement in Gethsemane, followed by a painful betrayal at a friend’s hands, an unfair secret trial, the demand for His death by His own people, mockery and torment by soldiers who knew nothing of His mission or who He was, and finally a horrific death upon a cross. I would highly encourage you to read these chapters in each of the Gospels for your own personal understanding and insight of these events. (Matthew 27, Mark 15, Luke 23, and John 19)

It is hard for me to put into words my feelings about these torturous last hours of my Redeemer’s earthly life.  As I read talks, listened to music and watched videos to prepare myself for this post I found myself weeping with compassion for my Savior, remorse for my own part in His suffering, and gratitude for what He was willing to go through for each of us.  His love-driven willpower is incomprehensible to me.  As much as I know His Grace is an offering free of my earning it, it does make me want to prove my gratitude through my actions.  I want to show my love to Him by using my time wisely and serving Him and those around me well. I think one of the other important ways for us to show our appreciation to Him for all He did for us is to accept the gift He has offered.  We must allow His atonement to be applied to us and not just believe in its effectiveness for other people, but to really believe we personally can be cleansed, sanctified and empowered by it.

When I was younger and tried to picture the atonement made in our behalf, I would imagine Christ suffering for culminations of individual sins, for instance, first He would suffer for all the lies that were ever told, then for all the murders that were ever committed, then for all the impure thoughts that were ever considered, and so forth.  A combination of study and spiritual growth over the years has given me a better understanding of the reason for what our Savior went through. He was willing to suffer for us because He loves us wholly and completely.  He loves us individually and wanted to understand us each perfectly so that He could succor us in the exact way we need to be attended to.  I believe the atonement was much more personal than suffering for clumps of similar sins.  I believe He suffered individually for each of us.  I believe He knows every moment of my life, my joys, my sorrows, my strengths, my weaknesses, my sins, my sicknesses, and every burden I will ever carry.  I do not know by what miracle this is possible, but I believe He is the God of the individual and this is the only way He could truly know me well enough to care for me in every way I need Him to.  And I believe He did the same thing for each of you.  It is a personal atonement.  An atonement made one by one.  And I believe He would have been willing to do it even if you were the only one.

Lay Down My Life

How can you allow the atonement to work in your life? Is their something specific you need to repent of? Is there something you’ve repented of you need to forgive yourself for?

The things that give me the most joy in my life are my God, my husband, my children, and creating things that bring joy to others. God has blessed me with so many gifts and talents and I know He expects me to use them to bless the lives of others. On my journey with Him I have learned so much about His love and the peace and happiness He wants us to feel in life. I started the blog "Finding the Eye of the Storm" as a way to show my gratitude to Him and to hopefully use the things He has taught me to help others find that same peace and joy that is only available through the atonement of His Divine Son. Aside from this blog, I spend my days facilitating a Facebook scripture study group (Scripture Study 365) and designing and creating flannel board stories and downloads to help parents and teachers share their love for Jesus Christ and His teachings with the children they love. I also have a number of classic stories and songs for teachers in a traditional classroom. View all posts by Oléa Gough